Our Room With a View

Following Superstorm Sandy–the monster that devastated much of the east coast, killing more than 100 people in the United States, we spent nine days in three different hotels. Our apartment building lost all utilities as its basement filled with salt water and the electrical equipment was severely damaged. Up until the morning we returned home, we did not know when we would be able to return to heat and light and our things. Yet, we had the peace in our hearts of knowing we would return. So many will not.

We were–and remain–among the luckiest in Sandy’s path. Our first temporary home was a hotel close to my husband’s office (he and his coworkers worked the day Sandy hit and every day since). In the powerless blackness, with two flashlights, we walked slowly with one bag of minimal clothing, each child’s favorite toy, and our three children in pajamas down many flights of stairs and were oh-so-happy to find a taxi waiting the night we fled our home in the dark. 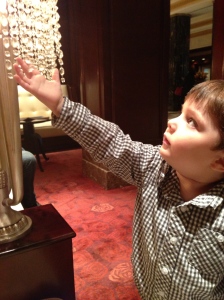 That first night was almost enjoyable. Outside our window was our beloved and hard-hit city. And there was so much relief for us. As we watched for the first time the images from around our area of heartbreaking loss and the faces of disbelief, it became clear: the brutal storm and floods had taken everything from so many. Ours is a region engulfed in the darkness of human tragedy.

I sat mesmerized by the news, my children asleep in our lovely hotel room, and tried to take in the horror. To appreciate our situation while keeping focus on the victims. But it is impossible to sit with this sadness. How do we embrace a world in which children are swept from their mother’s arms? How do we ever explain this?

There are tragedies from which we imagine we are immune. About some, we may be correct–most of us will never be dangerously hungry; our children will not die of preventable disease; we will not be victims of political unrest. And there are others that strike any, and therefore, all of us.

Darkness came upon New York City a few nights before the storm did. Late one evening we learned of an unspeakable crime that took the lives of another family’s most precious children.

My friends and I could not prevent our minds and hearts from attaching to this story. It broke all of us who are parents. It was all we could talk about until our thoughts and planning turned to the coming storm.

I have not written about these things until now. I am bursting with gratitude for my family and our safety. I am shaken with fear that we could be pulled apart. I did not want to write without being able to offer a conclusion, a comfort, something valuable. But I cannot find it.

What I can offer is our experience–the rooms and our view–over the past couple of weeks. Our packing and unpacking and returning and climbing dark stairs with dirty laundry and descending dark stairs with our children and clean clothes. Our sleeping in warm hotel rooms. My daughter’s weeklong virus and vomiting while we were away. We visited the doctor, we supplied up at several area drug stores. We ate in hotel restaurants and made up games using cosmetics and furniture and utensils in our rooms. I shared wine with friends who were also refugees at the same charming hotel. 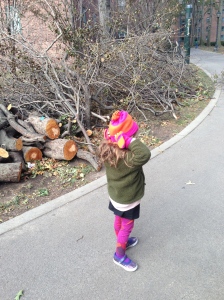 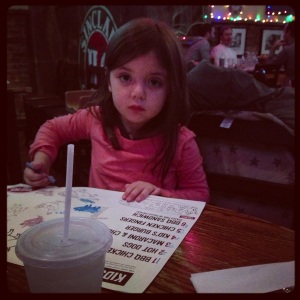 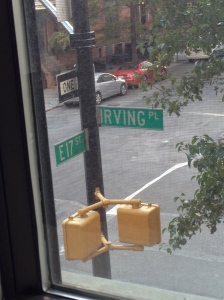 We came back to our apartment this past Thursday morning, knowing a working elevator, heat, and power were waiting for us. A snow storm had hit New York City the night before. The streets were wet and cold, making it difficult the move strollers packed with children and bags across slushy snow.

There was a power outage in our building that same afternoon. Just about the time I was starting to breathe again, acutely aware of my enjoyment of the radio, of light in the bathroom, of a working coffee machine. Minutes into it, my babysitter called from the elevator where she was stuck in total terrifying darkness with my youngest children.

Now I was aware of my inability to remain calm. My five-year-old daughter was with me in the apartment. We put on our shoes and walked into the darkness again, down to the sixth floor where the elevator stopped. I told my babies the fire department was on its way. And I waited for them to pry open the door so that I could see my children again.

Henry and Ellie were in the elevator with their sitter, in the complete blackness, for about 20 minutes. In that time, I imagined never seeing them again. I raced from our floor, holding Molly to speed us up, to the floor on which they were stuck and I thought about the elevator falling from its position. Or a fire. My head told me it was unlikely they were in danger. But an intense panic was driving my body and my heart toward them and toward my worst fears.

When we were all upstairs again, safe, sound, listening to my three year olds describe being stuck “where it was so dark,” I thanked my babysitter over and over again for keeping them safe and calm.

They were bathed by the light of a camping lantern. We ate cereal in the candlelight. I read a bedtime story guided by flashlight.

And days later now, we are returning to normal. To our normal. We are heading back to that place where scheduling appointments and going to school and grocery shopping have no dark components, where everything we do is mundane and mild. We are donating to help and bringing clothes to drives for the hardest hit. We are buying baby supplies online for others. We are not forgetting. But because it is inevitable, we are once again living in the sweet detachment of our good fortune.

6 Responses to Our Room With a View