You know who I love?  Melissa McCarthy.  Who doesn’t?  So I could end this post right here, saying she is the prettiest, funniest, sweetest person and we’d all be, like, “You bet she is! I agree. See ya.”  But, holy freaking awesomeness, I can tell you that I met her twice. That’s one time.  Then another time!

The first time I met Melissa (Yep. First name basis. We’re like that now.) was at an Emmy’s after party.  (Ok, even I can see that I am able to insert an Emmy’s reference into any post at this point. Kind of pathetic.)   I introduced myself to her and congratulated her on her win that night for BEST FREAKING ACTRESS in a comedy!  She was actually holding her Emmy.  I love her.  And she is so sweet and gracious and funny. Sigh.

So I am so crazy lucky that my good friend Jessica at Momma’s Gone City asked me to cover an Ivory Soap event that was to feature a “celebrity mom.”  Oh. Yes.  I stalked the heck out of Melissa, despite her publicist’s best efforts, and finally got close enough to say, “YOUPROBABLYDON’TREMEMBERMEBUTWEMETATJIMMYFALLON’SEMMYAFTERPARTY”

She so rocks that she claimed she did remember me.  Once again, love her.  While I would like to make this all about me–and Melissa–I really have to tell you how excited Melissa was to be the new spokesperson for Ivory, a product she told us her family has been using loyally for several generations. 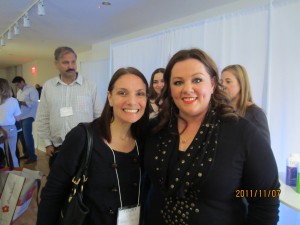 Ivory has a new print ad campaign that is colorful, simple and eye catching. It has also launched a new Facebook page called “The Soap Dish,” on which Melissa “dishes” with fans, mostly about being a busy working mom.  I love that Ivory is tapping into the busy mom market with a time-tested, pure product.  Ivory is more than 125 years old and contains pure ingredients, not a lot of what “we don’t want” on our faces.

She is the perfect spokeswoman/mom as far as I am concerned.  She’s delightful, genuine, beautiful and literally lights up a room when she appears.  She is also beyond gracious when making time to speak with press and fans.  And she wears killer heels.

And in a move that totally reflected her sparkle and obvious passion for Ivory soap, she was presented with a giant soap on which was sculpted… Melissa winning the Emmy. 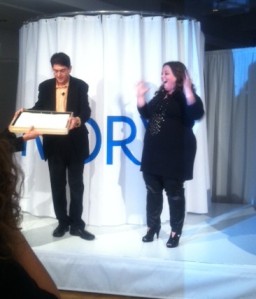 This event was covered for Momma’s Gone City. I received samples of Ivory products in a parting gift bag. All opinions are my own.

2 Responses to Ivory Has Its Golden Girl: Melissa McCarthy