The Dynamics of Three

One recent afternoon, as we were all winding down at home after school pick-up, Molly said to me, “You know what mommy?” And I expected an observation to come forth along the lines of “Spiders have an ‘abdomen.’ That’s where their guts are,” or “Birds bathe in puddles, then dry off in the sand.”

Instead I got, thought out and calmly perceived: “You know what mommy? You are only nice to Henry and not us.”

Okay. I asked why she thought that; my own theories were beginning to bubble.

I love all my children equally. This phenomenon is impossible to imagine before a second child is in the picture, and difficult to explain to someone anticipating a second child’s birth. We all worry we will somehow be unable to love any child as much as we love our first. And that does not happen. Love expands; it is time and attention we have to divide. And those are never equal.

Was that becoming obvious to my oldest? 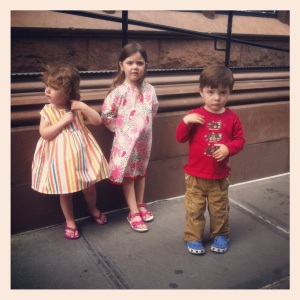 Molly is the oldest by only 19 months. She asks sophisticated questions about where squirrels go in the rain. She loves treats, floaty dresses, her sister, and her brother. In that order. And she loves me “to that number that doesn’t end.” She wrinkles her face up when something doesn’t make sense, and twirls her long hair absentmindedly until it tangles. She gets excited each morning for school and never wants to be late. But she insists on wearing the ribbon flats that fall off her feet and short sleeves on the coldest days; she is bossy, moody, and insistent, exhausting all of us. 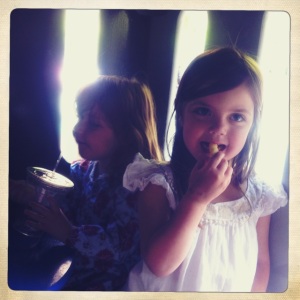 She is most like her mother. She wakes in the middle of the night asking about her playdate the next afternoon. Her sensitivity and intuition are painful. Sensitive girls notice, even at four years old, when friends make plans without them. Like magic though, a trip to Starbucks has can mend her broken heart. As compassionate as she is emotional, Molly is shaken to tears if she thinks her brother or sister will be left behind. 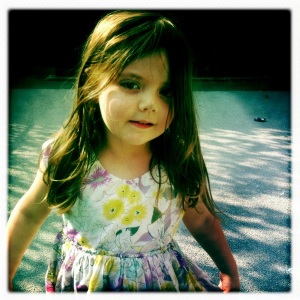 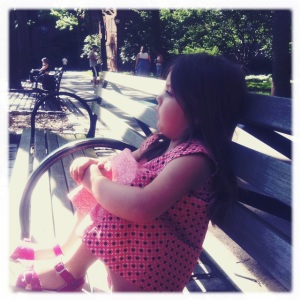 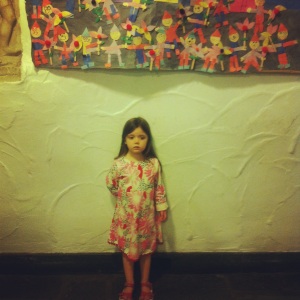 And Ellie may one day be that friend who leaves you wondering where her affection suddenly went. She’s full of dancing and kisses and jumping and explosive moments of fist pounding. She hasn’t any doubt the world will give her all the things she wants–lip gloss, cookies, a Barbie movie at bedtime, balloons climbing above the trees. 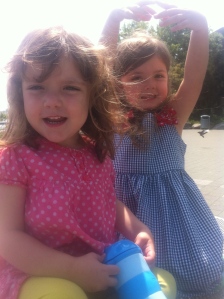 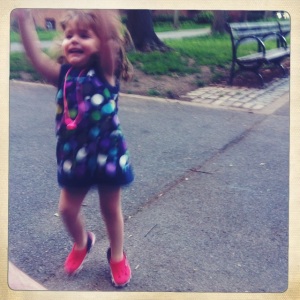 She’s clever and knows her audience; it is almost impossible to be angry with her as she raises her eyebrows and explains why she will not face consequences for refusing to put away toys. Ellie imitates everything her older sister does, yet it is obvious that she will very soon be the leader of the three. She speaks in paragraphs, not sentences, and will repeat her point until acknowledged just the way she wants. Her serious mood melts into giggles at the suggestion of a game of “I’m gonna get you.” 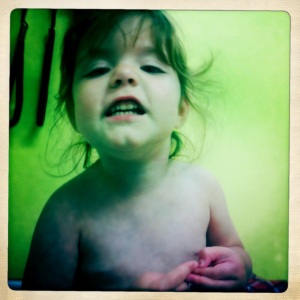 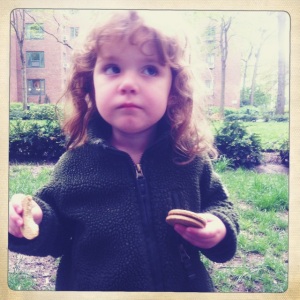 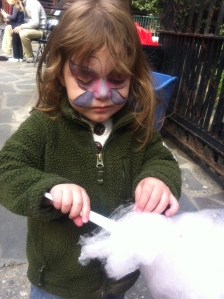 And Henry is the hardest to describe. Is it because he’s a boy I treat him differently? His sisters have a thickness to their bond, calling to each other from different rooms. They whisper and laugh the way little boys just don’t know how. Henry is slower to reach physical milestones and insecure in his abilities to balance and climb. Some days he gives everything to his physical and occupational therapy sessions; sometimes he hides in his room and refuses to participate. 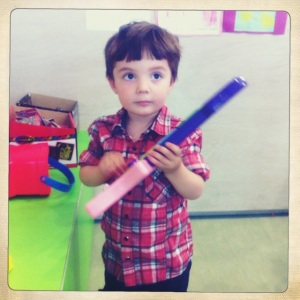 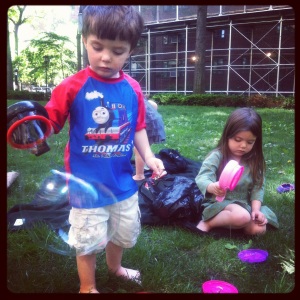 The nannies in our neighborhood call him “handsome.” Charming and conservative with his smiles, he watches his peers on the playground before inching closer. But Henry follows the older boys on scooters–he’s almost as fast, and he sings to himself loudly as he speeds along. His favorite toy, “tiny bear,” is tattered, ripped and in every way a mess. This doesn’t stop him from cuddling and talking to it, rubbing its nubby arm while he falls asleep each night. 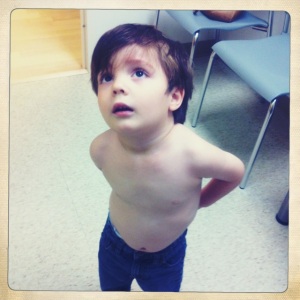 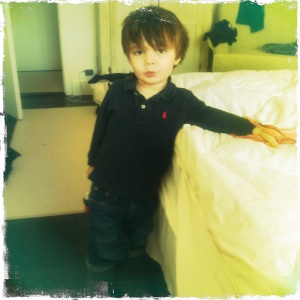 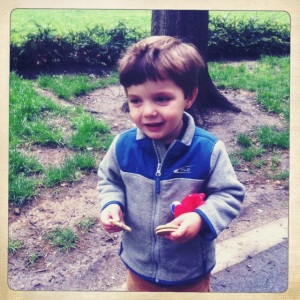 I understand why Molly thinks I am nicer to Henry. He is my baby while the girls are independent in their attitudes and ways. Minor scrapes and bumps send him crying to me, and as much as I demand he “shake it off”–I sort of like comforting him. 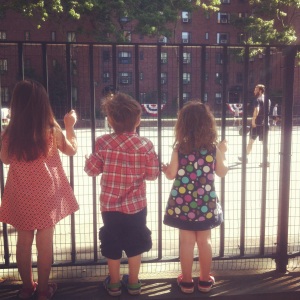 I am easier on him because he has unpredictable tantrums–and unlike the girls, he is completely unreachable when he is having a fit. When I need to be out the door with three children, I will do anything to avoid more screaming. Henry is, in some ways, the most difficult to keep happy. But he collapses easily into a hug and rests his head on my shoulder.

They separate themselves almost naturally. The girls play princess or “mommy” to their baby dolls. They take care of things, put order to their spaces and each other. Henry can drift into a world of trains and tracks and engines for hours by himself on the floor; there are names and places only he knows.

So Molly was reacting to something that had happened just a few minutes early that day. Henry was overtired and impossible, having half-napped in the stroller. I offered him the sofa or his bed to lie down, trying to calm everyone before baths and dinner. There was a point during this when I yelled at Molly “super loud.” I am sure this happened but I can’t recall why or when. I never want to be nice to one and not another. But it happens here. I don’t plan on spending more time with one child. I know this happens as well, and too often. The dynamics of three children are difficult for all of us to navigate through.

Each evening we sit together, watching a movie. The three fight over who sits next to me and where. One of the kids will remind me to put my phone away. 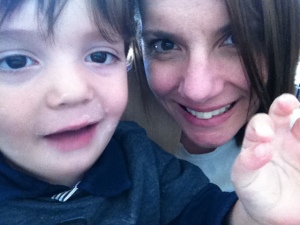 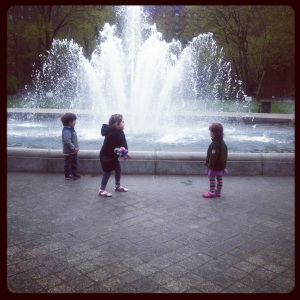 They point out who got an extra cookie, didn’t clean up, deserves to go to bed early. Sometimes I laugh at how bold and exacting their sense of justice is. Mostly I respond by reminding them I’m in charge. Because like them, I imagine the world the way I’d like it. 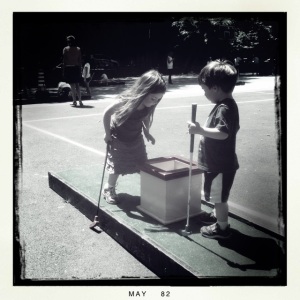 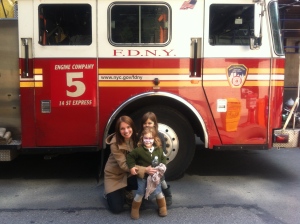 This entry was posted in Family Life, It's All About Me, New York City Living and Coping, Parenting Moments and tagged multiples, sharing, twins, twins plus one. Bookmark the permalink.

11 Responses to The Dynamics of Three